It’s a good time to be on the central coast of Portugal.

There are many. Except as noted, all take place in either the large city park (Parque Dom Carlos I), or in and around a campus-like cluster of municipal buildings about 800 meters to the west (a technical school, hospitality industry school, Senior University, indoor sports complex, city library, and a combination BMX / skate park).

” The feast days of the popular saints (festas dos Santos Populares) is held in every street, neighborhood, and public square of the city. The biggest street party of the year might sound religious in nature, but trust me, it’s really all about sardines, beer, and irritatingly catchy folk music called pimba, which can only be described as slightly polka sounding songs that focus on squeaky-clean lyrics with sexual undertones. “

Annual party hosted by the SCMCR, a group that assists children and seniors, who sometimes live in the SCMCR facilities. Besides the 4 bands, there will be sardines, snacks, pig roasted on a spit, and much liveliness. Admission will cost you 2 smiles and donation of 1 drink (beer or juice). Held in the bullring. For an aerial view of the facility, at Google Maps paste this into the search box: CV58+34 Caldas da Rainha , zoom in, then switch to satellite view.

The Superior School of Arts and Design of Caldas da Rainha (ESAD.CR) is one of the best in the nation. Don’t know if their students are the source of the works displayed.

Held at the regional bus station in the town center. The covered outdoor areas are so much larger than needed for waiting bus passengers, it seems as if it were designed as a dual use space.

The First Day of Shorts

Pleasantly toasty today. I took the long way to everywhere I walked. I was kissed by the sun and I liked it. Now I have to find where I put my sandals.

A Preview of Summer

Between the temperature and high humidity, it’s been cold enough that almost every day I wear long underwear as a base for multiple layers. That’s for indoors. The longies come off for anything involving more than a few minutes of walking outside. Yesterday was the first day warm enough to be in T-shirt and pants both indoors and out. Warm enough for me, that is. Today is warmer. Pleasantly toasty. Thirty two C (94 F) with 19% humidity.

That’s both comfortable and practical. My apartment has a washing machine and a balcony shaped enclosure with clothes lines. Until now, starting a load at 7-7:30 meant by sunset some items were still a bit damp. That’s on days without drizzle. Yesterday, the first load was crunchy dry by 1 pm. What were 2 large bath towels are now 2 large bath towel shaped loofahs.

One of the reasons I wanted to live in Caldas was its mild 4 season climate. It’s easier to carpe diem when nature provides a hard to miss reminder that the celestial clock is ticking. May brought with it two reminders – posters around town for events in the park, and a trickle of tourists. There will be photographs. Maybe there will be ones with posting.

How much does it cost to live there #2

Why I’m posting a snapshot of costs was explained previously.

For most of my time in Hua Hin the choice of western style markets was either a Wal-Mart style store or the store where addicted expats pay high prices for their favorites from home. So it’s nice to have a choice of where to food shop in Caldas. Within easy walking distance I can choose between 3 markets of Papa Bear, Mama Bear and Baby Bear size, plus the daily farmers market at Praça da Fruta (Fruit Square). Two big box supermarkets are a 20 minute walk, in different directions of course. Can’t get everything I want at any one place, so maybe what I buy where will tell you something about life here. Or about me. From what I’ve read online, such multi source shopping is typical in Portugal.

Auchan Market has the best choice of canned fish, prepared sauces, and what would be an insult to call canned pork parts and white beans, though those are the two main ingredients. I call them stews. Why canned foods? It’s an easy meal to dump half or all of a can on left over pasta or boiled potatos, add blanched veggies and dig in. 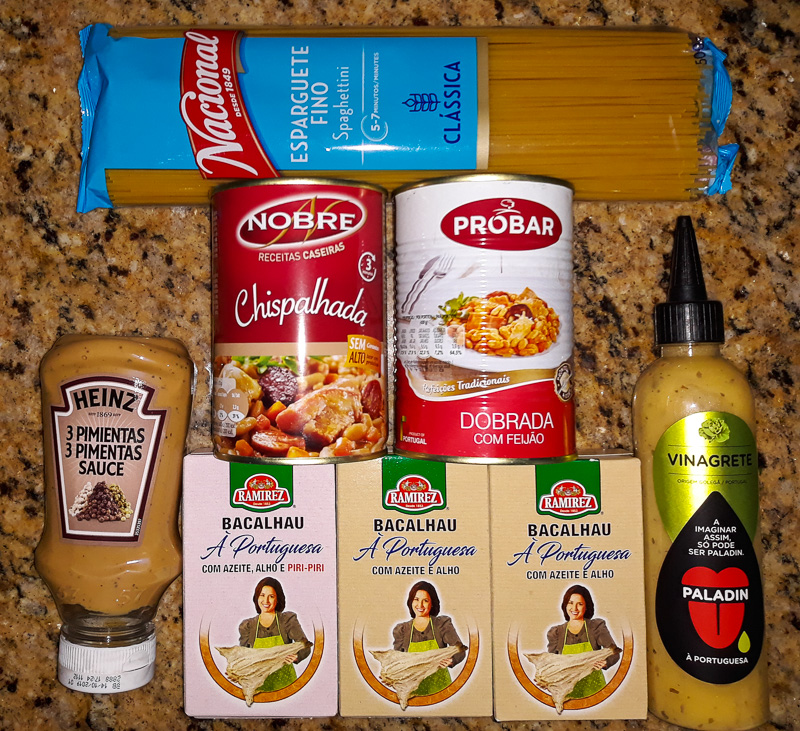 Pingo Doce has the best sweet potatoes, bread, and greens of the 3 markets. Also the only one to sell eggs by the half dozen. 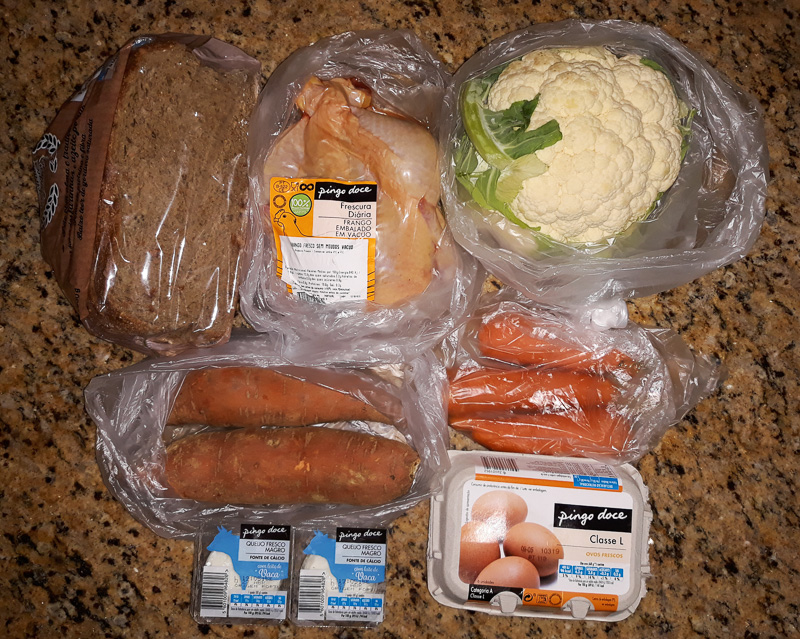 Daily Farmers Market is the only place for ready to eat roasted sweet potatoes. Far better produce choice than the 3 markets. Plus it’s fun to shop there.

Except for Gaviscon (non-generic OTC heartburn relief), my prescription and OTC meds cost less than in Thailand, which cost way less than in the US. Woo hoo!